Parse.ly is able to benchmark your traffic against similar periods. This is displayed on the Overview screen, as a summary, and as a grey watermark on the Overview and other detailed screens.

You can hover your cursor over the summary message, or on any % benchmarks on detail pages, such as for an author or section.

What constitutes a similar period? Our algorithm takes into consideration similar days (e.g. Tuesdays), and the same timeframe (e.g. Tuesdays, midnight until now). This is how we display the watermark behind the green sparkline, considering the ebb and flow of traffic not just on days of the week, but throughout the day as well. The % summary, then, will consider standard deviation from the normal traffic flow for that day, up until the current hour.

Here is an example in which we show 7% less traffic than an average Tuesday for all traffic up until roughly 7:30pm local time. You can see how they had slightly above average traffic right around 6:00pm, but before that, traffic was slightly below average for the morning, with an additional dip around noon. Even though they were above average from around 6:00 to 7:30pm, the % summary pictured below represents traffic on that day, from midnight up until 7:30pm. It compares this to the same time period (midnight – 7:30pm) for the last several Tuesdays. 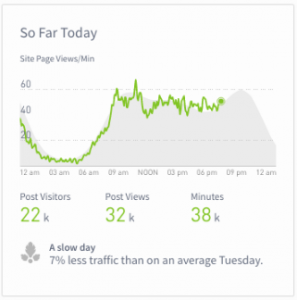 Here are some data points for the traffic pictured above. Note the deviation, pulled for the same time in the image:

The 7% deviation is reflected in vs_avg (1.00 – 0.93 = 0.07). Regarding potential outliers (extremely high or low days), we cap such deviations of each hour to the average + 1 standard deviation. This is so that an exceptionally good Tuesday wouldn’t ruin next several Tuesdays, but traffic for that Tuesday will not be ignored entirely.